In the time that I was gone, I was reading the Hunger Games and Divergent trilogies. And I’ve gotta say—one of them was NOT worth the hype. 😬

The Hunger Games (and The Ballad of Songbirds and Snakes)

In the ruins of a place once known as North America lies the nation of Panem, a shining Capitol surrounded by twelve outlying districts. The Capitol keeps the districts in line by forcing them all to send one boy and one girl between the ages of twelve and eighteen to participate in the annual Hunger Games, a fight to the death on live TV.

Sixteen-year-old Katniss Everdeen regards it as a death sentence when she steps forward to take her sister’s place in the Games. But Katniss has been close to death before—and survival, for her, is second nature. Still, if she is to win, she will have to start making choices that weigh survival against humanity and life against love.

Sooo my friends convinced me to read it after I convinced them to read both KotLC and HoO so y’know it was only fair I read Hunger Games.

~I was not disappointed~

I keep yelling that Peeta and Katniss was what I wanted in Sokeefe. 😭😤🥺🥲😒😡😞🤧

•anyway time to be serious•

I really enjoyed the first POV- I can’t be serious. I freakin loved it. I FREAKIN LOVED IT. Which of course means it broke my heart then fixed it halfway.

Let’s try and make sense at least: let’s see, I loved the ✨blooming romance✨ between Katniss and Peeta, I loved the plot twists and climax, I absolutely loved where Katniss was chilling and calmly thought, hey my kids are playing on a graveyard. Like what?

The Ballad of Songbirds and Snakes (more nonsense) 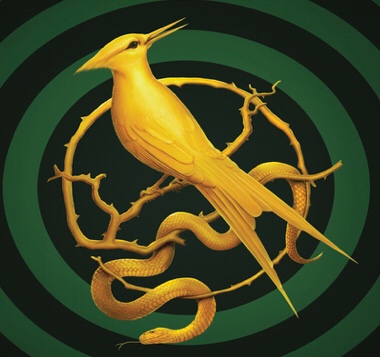 It is the morning of the reaping that will kick off the tenth annual Hunger Games. In the Capitol, eighteen-year-old Coriolanus Snow is preparing for his one shot at glory as a mentor in the Games. The once-mighty house of Snow has fallen on hard times, its fate hanging on the slender chance that Coriolanus will be able to outcharm, outwit, and outmaneuver his fellow students to mentor the winning tribute.

The odds are against him. He’s been given the humiliating assignment of mentoring the female tribute from District 12, the lowest of the low. Their fates are now completely intertwined—every choice Coriolanus makes could lead to favor or failure, triumph or ruin. Inside the arena, it will be a fight to the death. Outside the arena, Coriolanus starts to feel for his doomed tribute… and must weigh his need to follow the rules against his desire to survive no matter what it takes.

This biatch really just had to be all iM pOoR bUt i sHoUlD bE rIcH uGh. Like wha, am I supposed to be sorry for you? The NERVE of this dude!

*deep breath* So I loved Snow’s growth, even though it wasn’t really a step in the right direction. More like a sprint in the wrong direction.

Urgh I’ve just about made zero sense 😅. But that’s part of the job I guess. 😌

Perfect for fans of the Hunger Games and Maze Runner series, Divergent and its sequels, Insurgent and Allegiant, are the gripping story of a dystopian world transformed by courage, self-sacrifice, and love. Fans of the Divergent movie will find the book packed with just as much emotional depth and exhilarating action as the film, all told in beautiful, rich language.

One choice can transform you. Beatrice Prior’s society is divided into five factions—Candor (the honest), Abnegation (the selfless), Dauntless (the brave), Amity (the peaceful), and Erudite (the intelligent). Beatrice must choose between staying with her Abnegation family and transferring factions.

Her choice will shock her community and herself. But the newly christened Tris also has a secret, one she’s determined to keep hidden, because in this world, what makes you different makes you dangerous.

I just despise this series. I just- like when Tris was making out with Four and whatever she was like i UnDeRsTaNd iT aLl NoW. Like what?? HOW?? You mean like in Stung when this one girl had the cure in her spit and whatever so then her doctor was like oh yeah go kiss your boyfriend. Is that what’s going on?? LAST I CHECKED TOBIAS EATON WAS NORMAL AS FREAKING HADES AND NOW I’M CONFUSED.

And then (because I’m special in all the wrong ways), I gathered that Tris dIeS. But the books are all from her perspective, so that was unclear. Then book the third comes around with two perspectives. Well then. Goodbye Tris. (I never loved you anyway 🥰)

So yeah. Peace out ✌️ Αυτοί!

Published by ζωή! (on hiatus)

Well, I like everything Riordanverse, Keeper, and My Hero Academia related. If you like any of those things, you’ll have fun here! View more posts